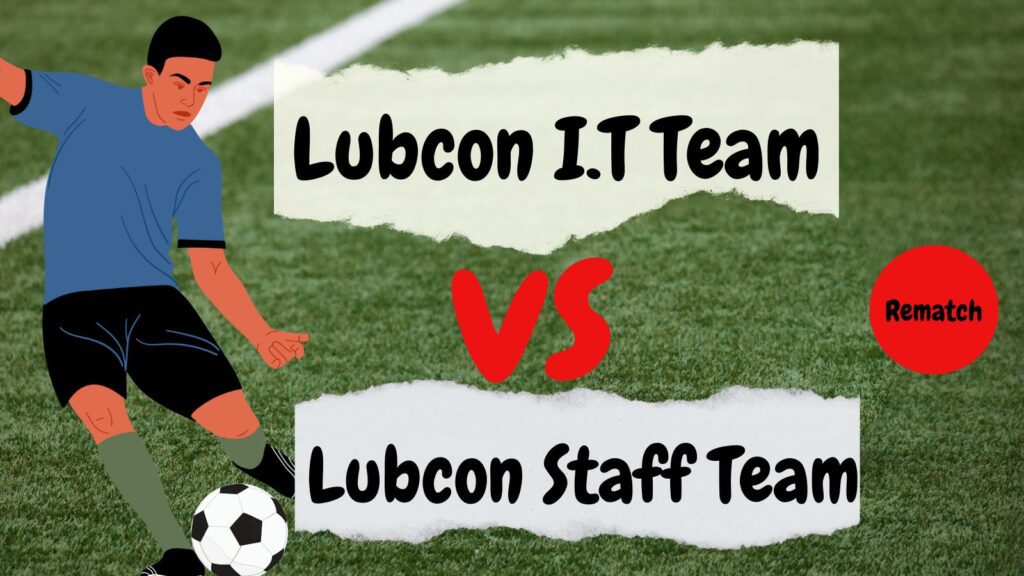 The much-anticipated soccer match between the Lubcon  I.T students and Lubcon staff ended 2-1 in favour of the latter. The rivalry started about three weeks ago when the Lubcon IT student team won the first match by 2-0, causing an instant demand for a rematch by the Lubcon staff team (spearheaded by Mr Ridwan, Mr Niyi and Mr Bassey).

On the 15th of July 2022, a date was scheduled for the rematch and almost immediately, the bragging started flying from every corner of Lubcon Limited on who would be victorious. Some staff members such as Mr Kayode(finance) on the D-day blamed the lack of a good keeper as the cause of their first defeat while joking about getting a better keeper replacement such as Mr Okon on their team.

By the close of work hours on the 22nd of July,2022. All the interested parties moved to the venue of the soccer match located at hajj camp on lubcon road to play a 7×7 team match. As I looked through the pitch, I carefully observed the preparedness level on both sides, I noticed how the number of people willing to play for the Lubcon staff team was way higher compared to the number in the other team-giving them a numerical advantage in refreshing their team through substitution. At about 5:35 pm, the match official (Mr Bassey) blew the whistle for the commencement of the match which was meant to last for 70mins(35mins each half).

The match started lively with the Lubcon staff team coming out on top with three quick off-target attempts by Mr Ridwan but the Lubcon IT defence was organized and easily tracked down any shot. As the game progressed, the IT team were given a free kick which created a glorious chance in the 13th min but  Mr Goodness couldn’t take advantage of a free header at the near post.

In the 20th minute, the Lubcon IT team should have had a penalty due to a handball but Mr Bassey waved it away. As events continued to unfold, the Lubcon IT team defence began to crumble as some of the defensive players began to overlap and weren’t tracking back properly, leaving only Mr Bolaji against 3 attackers in some cases, not long after, the first goal was scored by Mr Nurudeen and loud celebration was heard from the Lubcon supporters. The goal immediately gave the Lubcon staff team morale and they should have doubled and even tripled their lead within three minutes after the first goal but they wasted these chances.

As the Lubcon IT defenders kept overlapping; the lack of good finishing and brilliant keeping from Mr Abdulrasaq Mubaraq kept the Lubcon IT team in the game.

In the stands, beside me was a section of the IT team supporters shouting at every tackle the Lubcon staff team made on their team players and clamouring for a red card. At this point, Mr Moyokun who started well for the Lubcon IT team was already tired and chances were not made.

Finally, the halftime whistle was blown, Mr Mashood cheered the Lubcon team and gave game tactics for the second half as Mr Bassey and Mr Tunji(marketing) were warming up, hoping to be the super strikers their team needed. At the Lubcon IT area, Mr Moses was busy putting the team in order and tactics were being discussed. Lubcon team management decided to introduce Mr Bassey as a fresh strike force, hoping he would extend the lead for the team. The new referee “Mr Kabiru” blows for the start of the second half to begin and the game started just like the first half but this time, the Lubcon IT team were looking for an early equalizer while the Lubcon staff were trying to preserve their lead. As the game went on Super striker Mr Bassey ended up scrambling to get the ball due to hard marking and was angry why the ball wasn’t passed to him on numerous occasions.

About 15 mins into the second half, the Lubcon staff team doubled their lead through a thunderous shot by Mr Joseph which hit the top bar, leaving  Mr Mubaraq-  a.k.a FLIP scrambling on the floor to keep out the ball, giving Mr Ridwan time to hit a rebound from a tight angle into the net. A wild celebration by the Lubcon supporters was heard.

A restart was on its way, even when I thought the Lubcon IT supporters beside me would finally have nothing to cheer about… they kept saying the game is now level since they also won the first match by 2 goal difference. When the game looked like it was going to end 2-0, Mr Goodness of the Lubcon IT team made a solo run and scored, waking up a group of now quiet supporters beside me in the hope of a comeback. This goal gave them the momentum they needed, the team pressed hard for an immediate leveller which would have come their way if not for the quick closing down done by the Lubcon staff team and some quick reactions by the goalkeeper.

The back line of Lubcon staff looked organized for a large period of the match thanks to the defensive leadership of Mr Ahmad(blending dept) in monitoring attacking players and the brilliant goalkeeping of Mr Niyi.

At 6:48 pm, the final whistle was blown, and not long after, bitterness and anger were thrown at the match officials on why they were denied two penalties (one in the first half and the other, at the closing mins of the second half), they also the complained of hard breaking tackles done by Mr Nafiu(store) which weren’t penalised. Supporters were quick to disperse as rumours of a third match were already flying about the pitch.